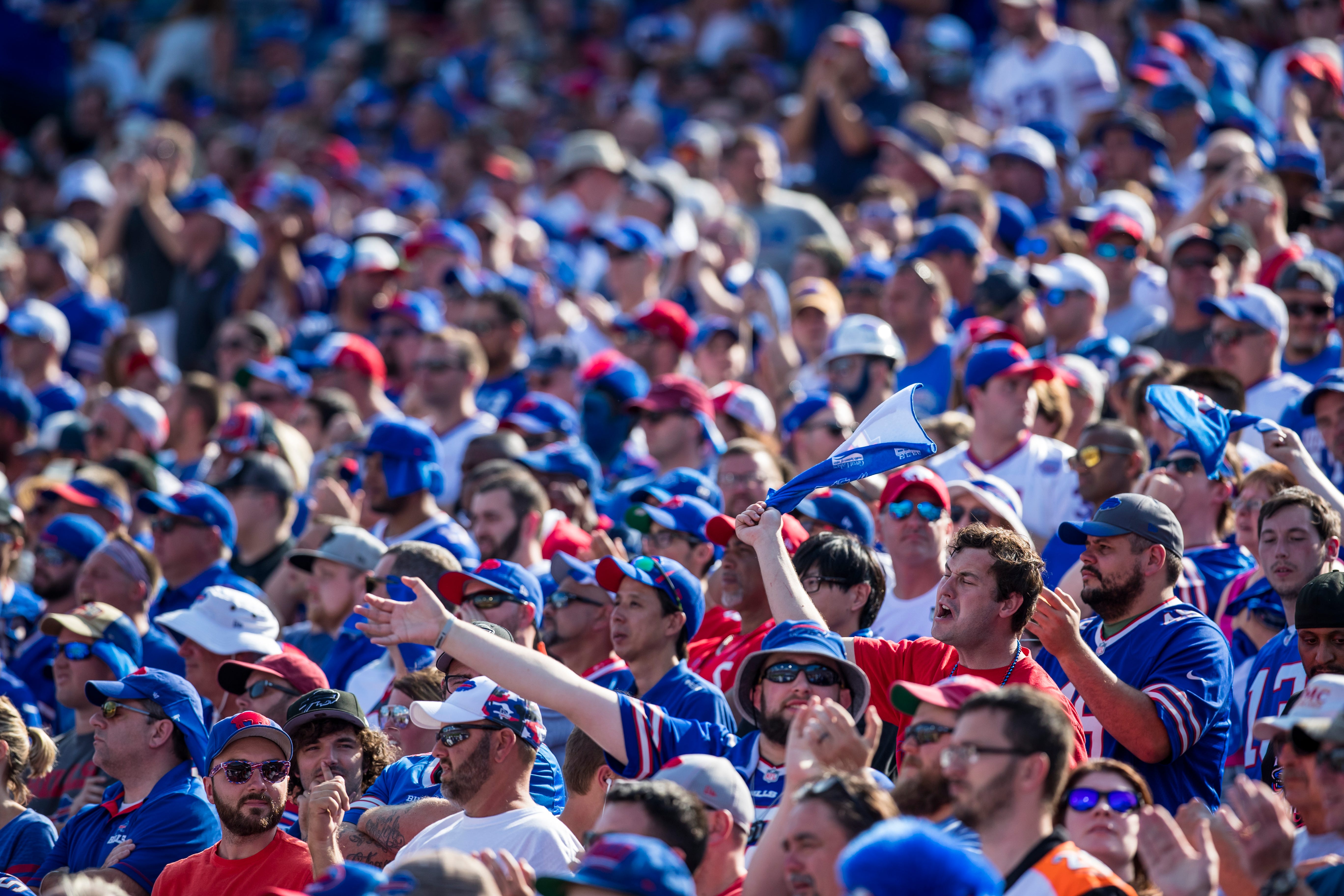 Sure it’s sports, but it’s so much more, right?

Everywhere we turn we’re hearing stories of “Bills Mafia” and the family feel that this fanbase shares so strongly.

So here’s my story…

Saturday will mark the first complete year of my life, without my mother, Marianne. On Jan. 23, 2020, she was killed suddenly, in a car accident.

The days that followed were a complete whirlwind. The shock of the sudden loss, the daily visits to an ICU in Rochester to visit her partner, Paul, the passenger in her car that survived, planning a funeral, and… I mean… so, so much.

This all happened pre-pandemic, so I had a chance to be with family throughout. There were hugs shared, full wakes and family gatherings, and I will never take those for granted ever again.

As her only child, it was the honor of my life to give her eulogy. And through all of the emotions that came with delivering a speech to remember my mother, a teacher who most certainly would have wanted to proofread it as she did EVERYTHING I’ve ever written, an identifiable feeling of pressure came. I felt the anxiety of the big moment, but in a way that I’d imagine a professional athlete might.

I felt like I was about to pitch Game 7 of the World Series.

Her death is something I still deal with, as anyone that’s lost someone important knows all too well. Sometimes you can schedule that grief, and other times it’ll come on you out of nowhere. I’m scheduling some for this weekend, the anniversary of a phone call from a hospital that I feel I can remember word-for-word.

But there’s more to this story. It’s a story I love to tell, and a day I love to look back on.

I did not grow up a Bills fan, but a move to Buffalo in 2000 started a change in that department. When I showed up, the Bills stopped being good. 25 years without an AFC East title and 17 of those without a sniff of the playoffs.

I started working weekend shifts at WGR producing Sunday Night Baseball, and moved up to the occasional producer or fill-in host shift over the next year or two.  When the time came to work with Brad Riter at night, a full-time job and a regular shift meant my mother could crow about my success.  I had a career, and she could be a part of it too.

She wasn’t a Bills fan or a Buffalo sports fan, but she was undoubtedly a fan of me (as moms are), and that meant she paid attention to what I paid attention to. She’d drive to the edge of Auburn, my hometown, to pick up the WGR signal in the evenings. There was an ice cream place right around there where she’d go with a friend to get creamsicles and listen to her son talk about Tom Donahoe or Mike Mularkey, and how the Bills should approach the upcoming NFL Draft.

This past year, our shows on WGR have been different because the entire world has changed. But the biggest difference, for me, is that she’s not listening day-to-day.

There’s no phone call immediately after I’m off the air. My routine for about 15 years had been to leave the station, and call my mom just to get the quick chat/check-in. Most of the time, I didn’t have too much to say, but that’s what we did. Just about every day.

My mother was very proud of me. That I know. I don’t say that in any sort of arrogant way, just as a tribute to her, and how often she told me she was.

At her funeral, friends and family would come up to me with varied versions of “You were her world” and I would always say, “I know.” I know that I was. She was a giving person who gave herself and her time to so many people. She would volunteer shifts at the local hospital or at Meals on Wheels. She’d call me in with my truck for a favor to move someone’s couch or dresser. She’d be an ear to listen, or a shoulder to cry on. She was a great friend to so many, and a wonderful mother. She was the kind of parent that I hope to become.

So she knew how much I loved sports and watched me grow up as a member of the Sportscenter Generation. Watching non-stop all morning before school. Watching non-stop through the day if I was ever home sick, or for a snow day. She was always there watching with me, or ready to talk about any big game. She was always there to fuel my passion and encourage me to pursue my interests.

Moving to Buffalo with very few contacts, she was my first roommate. No, she didn’t move out here with me, but she helped push my career forward by splitting my rent with me. I lived in a “garden level” apartment, grinding out a couple jobs and trying to get my foot in the door at WGR55.

Our Buffalo sports conversations during that drought often went a little something like this:

The Bills would have beaten, maybe, Miami in Week 14 or something, to move to 4-9. I can hear her voice through the phone:

And then my response, the occasionally dismissive talkshow host but also her son would say something like, “Oh come on, it’s nothing. They’re still crappy, and it really doesn’t mean anything. Probably gonna fire their coach and they gotta get a quarterback.”

See, when I came to Buffalo and started watching these Bills and going to these games, it was a job. It was maybe the start of a career, and definitely a good time.

I get to go to NFL games at a reasonable price, drink a few beers, and talk about it on the radio. Living the dream, right? What does the future hold? Who knows, but this is cool!

Well things changed over time, and that change hit exponentially the last four or five years. Meeting my wife and her family transitioned my football life from the “Sunday Funday” Bills game and tailgate experience to bi-weekly family reunions.

These games aren’t just games, anymore. Every home game is Thanksgiving. Every road game is a chance to see friends.

Week 1 of this year, we went to Evangola State Park to tailgate and watch outside, cause that’s what we do. Through this run, we’ve watched outside with masks, social distance, and patio fires because that’s… what… we… do.

The Bills aren’t just a sports team to me, anymore. The Bills are what brings my family together.

Last year, we had a huge party for the Houston Texans Wild Card Round game. Huge. Biggest party since the actual wedding probably. We had to have had 30-plus people here for a giant cookout and watch party.

Mom and Paul had come up to be a part of the day-long festivities, which I had pushed for big time. My mom and I had gotten to a point where we could hang out more often as friends.

Everyone has different relationships with their parents, and while my mother and I were always very close, we didn’t really cut loose and hang out as friends until the last 3-4 years. I’d built a life here in Buffalo with a new family, great friends, a job and home, and on a Saturday afternoon in January, it all came together.

She sat on the couch near the television and took in the sights. Come on, what did your house look like through that game? Close your eyes and picture just how crazy we get, right? And here’s my 70 year-old mother smiling ear-to-ear, soaking it in, loving every bit of the madness. The yelling and screaming, friends’ small children running through the house, way too many dogs that we normally have. I smoked some pulled pork that, most definitely, ran behind schedule, as every smoke does.

We had everybody, and we had everything. Turns out, it was the last “tailgate” we all had together.

I can remember doing postgame shows of that Bills-Texans game and I couldn’t find a way to be mad about it at all. I just kept saying how happy I was that it happened. I was the definition of “happy to be there” guy.

To have the Bills in that game, to have our whole family, our whole life around us, in all its craziness and wonderfulness was everything. My wife and I still mourning our loss, surrounded by love.

She went home to Auburn the next day, and while we would speak a few times, it was the last time I saw my mother.

I don’t remember our last conversation, because so many of those were the post-work check-in. We didn’t talk the day she died. We texted a bit the night before. But I never felt too much that guilt of “I didn’t get to say goodbye,” because of the day we had just shared a few weeks before. She had stepped fully into my world, my Buffalo life, built largely with her love and support.

What started as humdrum small talk about football games, became what it is for millions.

This team connects us to our loved ones and to each other.

I’m thinking of so many of you that we, at our station, get to know through pictures, social media, the newspaper, television, or on the airwaves, and how much this means to you. It’s more than football, it really is about family. It’s about each family. And I’m forever thankful my whole family had that one day last year.

I can hear her saying it, still. She’d be loving this so much.

Family and football. It’s what we do.

Full moon Feb. 2021: The right way to see the snow moon within the evening sky this weekend

The final weekend of February begins with a brilliant full moon, the snow moon, shining within the sky.Catch the snow moon because...
Read more
Uncategorized

How you can Deal With Public Bogs Throughout Coronavirus

Meaning mother and father open the door, lay out a bathroom seat cowl, carry a baby onto the bathroom, assist them wipe, flush...
Read more
Uncategorized

Mote is a wonderful Chrome extension I found via Richard Byrne  which you should use to create and share voice notes. Mote is...
Read more
Uncategorized

The Coronavirus Is Threatening a Comeback. Right here’s Tips on how to Cease It.

Throughout america, and the world, the coronavirus appears to be loosening its stranglehold. The lethal curve of circumstances, hospitalizations and deaths has yo-yoed...
Read more

Full moon Feb. 2021: The right way to see the snow moon within the evening sky this weekend

The final weekend of February begins with a brilliant full moon, the snow moon, shining within the sky.Catch the snow moon because...
Read more

How you can Deal With Public Bogs Throughout Coronavirus

Meaning mother and father open the door, lay out a bathroom seat cowl, carry a baby onto the bathroom, assist them wipe, flush...
Read more

Mote is a wonderful Chrome extension I found via Richard Byrne  which you should use to create and share voice notes. Mote is...
Read more

The Coronavirus Is Threatening a Comeback. Right here’s Tips on how to Cease It.

Throughout america, and the world, the coronavirus appears to be loosening its stranglehold. The lethal curve of circumstances, hospitalizations and deaths has yo-yoed...
Read more

Unique: How Obama went to bat for Warren

Destiny Vincent Winslow was sentenced to life with out the potential for parole after promoting an undercover officer $20 price of marijuana in 2008....
Read more
Uncategorized

McDonald has bigger plans than football upon retirement